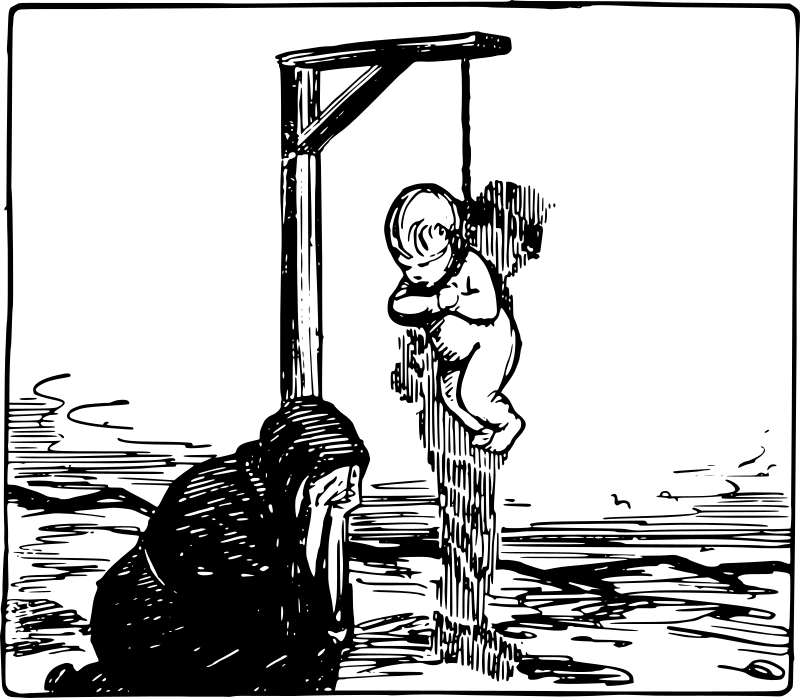 They were a bit more openly morbid back in the past maybe. This image is of a baby hanging. I guess the only way to clearly understand the thinking behind that is to read the original article that accompanied it. I don't usually preserve that along with the synthesized clipart, but in this case it's worth a read I guess:

The other day a man was "hanged

by the neck until dead."

To the executioner, the doctors,

the newspaper men, the jury that

tried him, the judge that sentenced

But to a woman- the woman who

brought him into this world of ours,

he was a baby; HER BABY!

To this poor, worn, heartbroken

little woman, the being on the gallows,

that being with a black cap

closing his eyes to his fellow man;

that being with a tightening noose

around his neck was NOT a man. As

she sat in her darkened home and

waited for the moment that was to

dash HER BABY into eternity, her

thought harkened back again for the

millionth time to her baby's cradle

Again and again she hugged in her

empty arms the spirit form of her

baby. She crooned over the baby as

she used to do. She looked into those

eyes and saw the black cap! She

kissed the baby's neck and felt the

baby's tiny toes and found them

standing on the gallows!

Just keep that thought in mind

when you read about a man being

MOTHER OF THAT MAN is having

burned into her heart THE HANGING

You know, it isn't that mother's

fault that her baby turned out to be

what the world calls a "bad man."

She didn't put the poolroom, the saloon,

the gambling den in her boy's

way. Society did all that; and society

is now hanging the product of