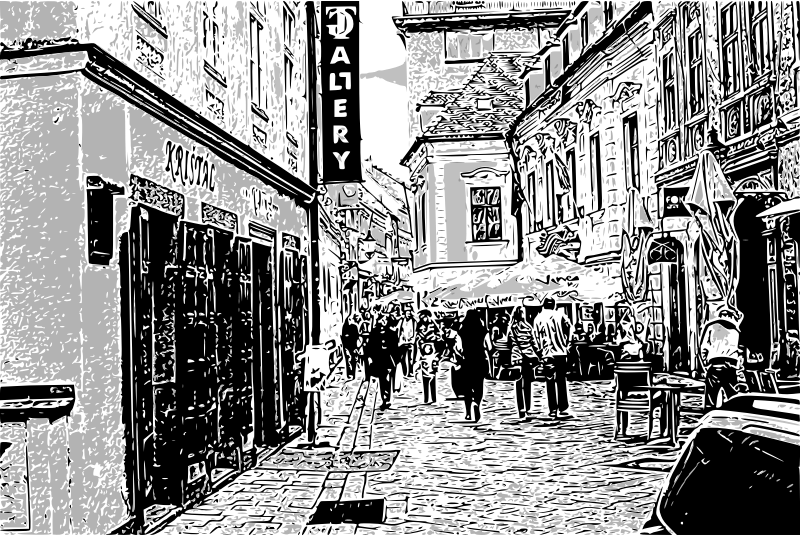 A Street in Bratislava

Made from a photograph I took in September of, if I recall correctly, 2012. The street is in Bratislava, the capital of Slovakia, part of the Old Town. The Austrians call Bratislava Pressburg (or, actually, Preßburg), the Magyars call it Pozsony. In Latin it is Posonium, and in Greek Istropolis (which literally means City on the Danube). Before WWI the Slovaks called it Prešporok. In 1918 some politicians wanted to rename it Wilson, after the then US president. Nothing against President Wilson, but I’m glad they settled on Bratislava, after a noble named Bräslav, who used to be one of the founders of the city. Even the Austrian name came from how the Austrians called its very old name Bräslavesburg.

As a little boy, growing up in Bratislava, I loved this street and the neighboring streets. Most of these streets, including this one, were empty of people, so it was always an adventure to walk through these streets.

Last time I visited Bratislava (so far, hopefully) was in September of, iirc, 2012. The streets I loved as a child were now full of tourists from all over the world! Ouch! Argh! Oh, well, as they say in Vienna, kamma nix mochen.

Can somebody explain why I’m writing a lengthy essay at 3 AM? Ha! Go to bed,Adam!

8 Comments. Please login to comment or add your own remix.