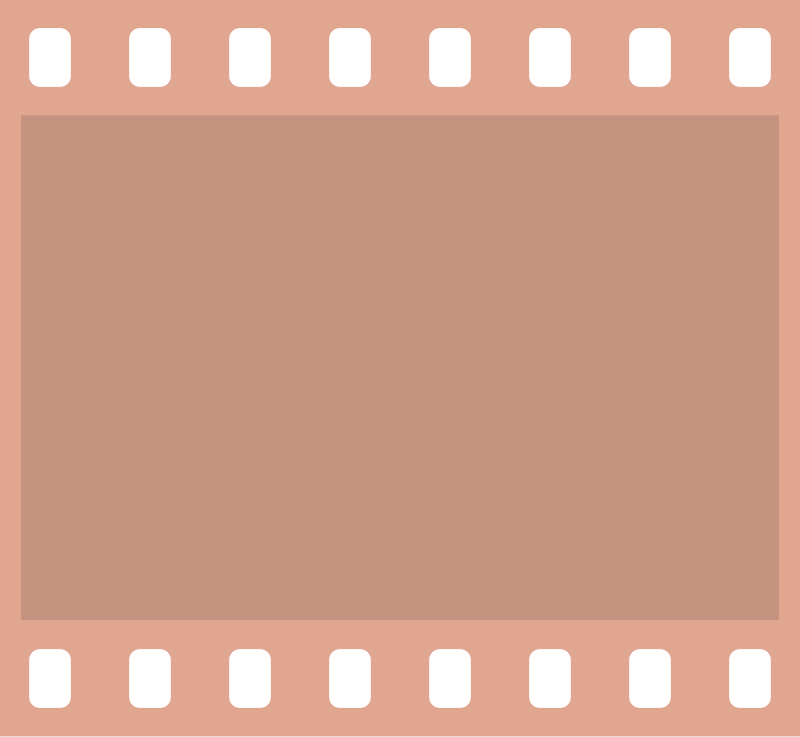 This is a standard 35 mm film frame as used in photography (as opposed to cinema, which also uses the 35 mm film, but does so quite differently).

A standard 35 mm photography frame is 8 perforations, which is exactly 38 mm, wide. The image portion is 36 mm wide (leaving 2 mm for some space to separate the images from each other) and 24 mm high.

The size and location of the perforation on the film was meticulously standardized in 1920 by Kodak, with a precision to 1 µm (micrometer, there are thousand µm in a millimeter), even the radius of the round corners of the perforation is defined to be 0.51 mm, i.e., 510 µm. See https://en.wikipedia.org/wiki/Film_perforations#KS if you want to read about it.

And yes, this vector graphic was hand coded and follows that specification exactly. Naturally, you can resize it like any other vector graphic, but if you display it at its native size with the width of 38 mm and height of 35 mm, every little detail is where it should be.

Plus the somewhat darker rectangle in the middle of the graphic is 24 mm high and 36 mm wide. So, if you want to remix it with an image (and I hope you do) and make it look like real film, just replace the rectangle with whatever “photograph” you want and size it exactly as the rectangle is here (note that the image area does NOT have rounded corners despite graphic artists often drawing it rounded; of course, you can do whatever is best for your own artistic vision).

You may be wondering why the film is not depicted white. That’s because film is not white. Various types of film are of various colors. The film is transparent but not 100% so (if it was, it would be invisible). That is why a strong light is needed to make prints in a magnifier or to show a movie using a film projector. When you remix this, feel free to change the color, as well as the opacity, of the film. Both are defined in the group with the id of Film, i.e., in the line (presumably, your graphic software will let you change these values for that (and any other) group.