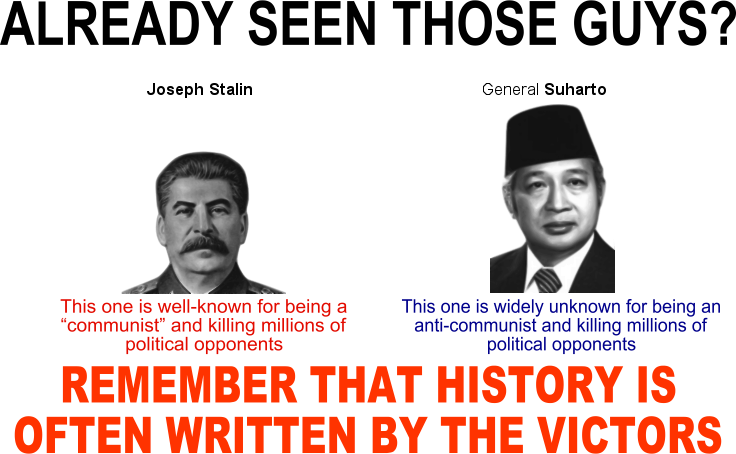 History is written by the victors

An example of how subjective human history is.

Two men are shown on this clipart:

• one is Joseph Stalin, who led the USSR between 1924 and 1953: he is accountable for the death of up to a million of political opponents during the Stalinist purges, between 1936 and 1938, and millions more during famines;

• the other one is the Indonesian general Muhammad Soeharto, who ruled Indonesia between 1967 and 1998, and led purges in 1965: he is accountable for the death of anywhere between 500 000 and 3 million political opponents during the purges, that aimed all of his opponents, namely communists, democrats, poor peasants, etc., as well as a genocide in East Timor, that killed 200 000 people.

Both of those men have committed crimes of similar extents, but the first one is much more widely known than the second one; and this only because he claimed to be "communist".

If a communist has to assume the full extent of the crimes of Stalin, why doesn't a capitalist have to assume those of Soeharto?

History is written by the victors, in that case, capitalists: and they are the very last people who can be counted on, when it comes to telling facts objectively. They always try to criminalize those who think otherwise.

4 Comments. Please login to comment or add your own remix.