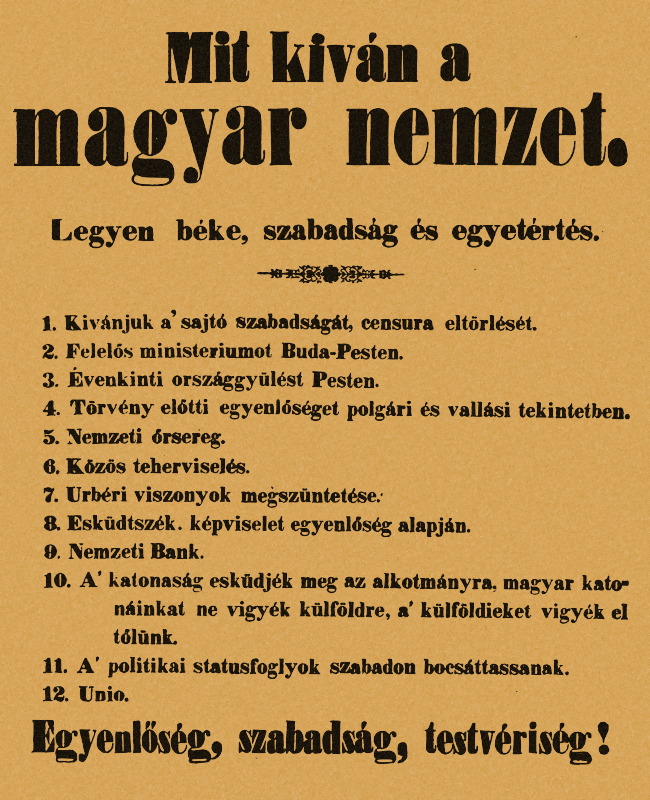 12 points of the Hungarian Revolutionaries of 1848.

Today it's the 170th anniversary.

Any improvements since? You bet.

Translation of the writing:

>>What the Hungarian nation wants.

>>Let there be peace, liberty, and concord.

>>We demand the freedom of the press, the abolition of censorship.

>>Civil and religious equality before the law.

>>The abolition of the Aviticum

>>Juries and courts based on an equal legal representation.

>>The army must take an oath on the Constitution, send our soldiers home and take foreign soldiers away.

Arguably there is no progress in most of those points, and where there was, it got worse.

Censorship is higher than ever. With the current mafia governing the country they hold the largest propaganda machine ever, all payed by tax money.

The government may be independent from the "Habsburg Empire" yet after the revolution in 1989 ("system change", end of the communist era) it was established by ex-soviet agency people and till today we don't have the list of previous political spies public.

Instead we have the "political elite" of all corrupt people.

Noone is ever getting convicted or accused. Corruption skyrockets, the national debt worth is kept secret (and getting ever bigger out of their actions).

Civil law equity is non-existent. Similar to the government, there is no control over the law enforcement, jurisdication and prosecutors. There are some people accused basically for their political views.

National army as per se is nonexistent. Obligatory military service ceased to exist in 2004, since then the military is more of a mercenary.

Which, as being part of the NATO also operates in foreign countries.

Taxation -currently we have the highest VAT in the EU. All landing in incompetent and corrupt government projects.

At this point Transylvania can be thankful the current governments have no intention in revising the enforced borders of trianon.

More info on the points here: