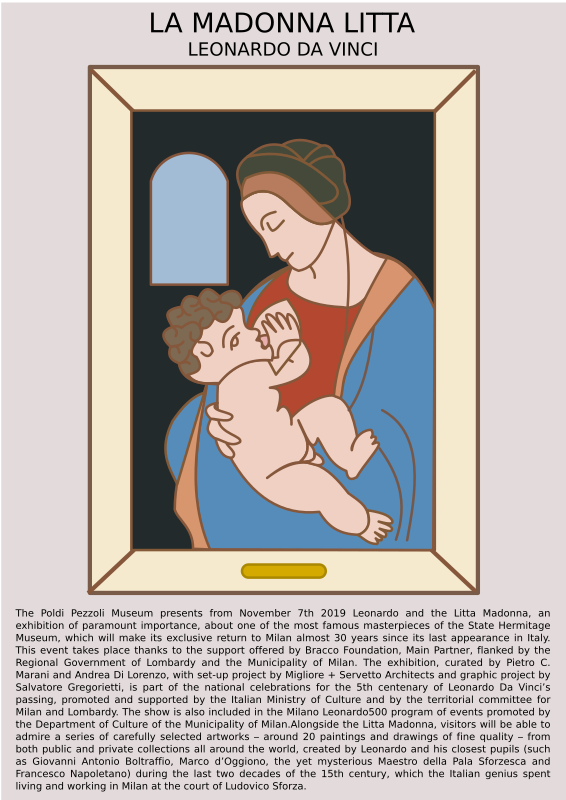 The Poldi Pezzoli Museum presents from November 7th 2019 Leonardo and the Litta Madonna, an exhibition of paramount importance, about one of the most famous masterpieces of the State Hermitage Museum, which will make its exclusive return to Milan almost 30 years since its last appearance in Italy.

This event takes place thanks to the support offered by Bracco Foundation, Main Partner, flanked by the Regional Government of Lombardy and the Municipality of Milan. The exhibition, curated by Pietro C. Marani and Andrea Di Lorenzo, with set-up project by Migliore + Servetto Architects and graphic project by Salvatore Gregorietti, is part of the national celebrations for the 5th centenary of Leonardo Da Vinciâs passing, promoted and supported by the Italian Ministry of Culture and by the territorial committee for Milan and Lombardy. The show is also included in the Milano Leonardo500 program of events promoted by the Department of Culture of the Municipality of Milan.

Alongside the Litta Madonna, visitors will be able to admire a series of carefully selected artworks â around 20 paintings and drawings of fine quality â from both public and private collections all around the world, created by Leonardo and his closest pupils (such as Giovanni Antonio Boltraffio, Marco dâOggiono, the yet mysterious Maestro della Pala Sforzesca and Francesco Napoletano) during the last two decades of the 15th century, which the Italian genius spent living and working in Milan at the court of Ludovico Sforza.