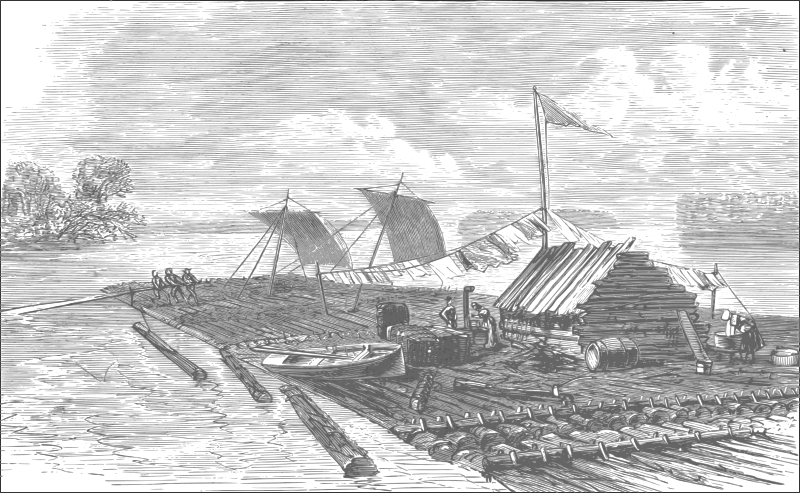 An illustration of a type of Mississippi River raft called a "broadhorn" from page 47 of America Illustrated, edited by J. David Williams, published 1874 in New York City by The Echo Press.

The caption says, "The Raft.", the artist's signature is "A. R. Waud" (removed from this SVG image) and an accompanying passage of text states,

"A notable feature of the Mississippi and of its tributaries is the raft. Rafts are masses of floating timber which find a ready sale at the numerous saw-mills in the vicinity of New Orleans. The flat-boat (sometimes called “broadhorn”) is built of plank, and is sometimes a hundred feet long, and thirty broad. It is rectangular, and sometimes roofed over, and is used to carry the produce of the farmers to the large cities along the river banks. Occasionally a lumberman takes his family with him on board his raft, and it is to be hoped that these civilizing influences will, in the course of time, as in the case of the boatmen on the Erie Canal, do something toward ameliorating the manners of these rude pioneers."

One traced layer was removed from the image to reduce its size for upload to openclipart.org; the path object should be easily recombined if desired: