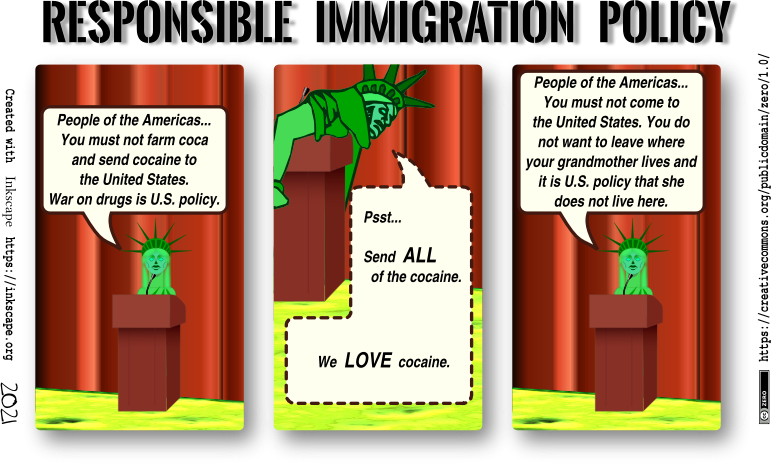 A comment on the hypocrisy of the immigration policy of the United States, the nature of the United States as an immigrant nation, and the construction of the U.S. economy with immigrant labor and immigrant entrepreneurship at its core, in reference to comments on June 7 2021 by VPOTUS Kamala Harris in a joint appearance with Guatemalan President Alejandro Giammattei in Guatemala City. Harris told potential migrants to the United States "Do not come. Do not come. The United States will continue to enforce our laws and secure our border." and "Most people don’t want to leave where their grandmother lives."

The Statue of Liberty (https://es.wikipedia.org/wiki/Estatua_de_la_Libertad) or "Liberty Enlightening the World" was a gift from the people of France to the United States, assembled and unveiled on Liberty Island in New York Harbor in 1886. It is frequently used in synecdoches to represent the entire United States and particularly to symbolize freedoms, and appears in American literature amongst narratives of some citizens who arrived on the East Coast. "The New Colossus" is a sonnet by poet Emma Lazarus inscribed in a plaque installed on the Statue's pedestal in the twentieth century; it draws a contrast with the Colossus of Rhodes, applies the kenning Mother of Exiles to the Statue, and addresses the world's immigrants as "your tired, your poor, Your huddled masses yearning to breathe free, The wretched refuse of your teeming shore."

This image portrays the Statue of Liberty as a speaker at a podium in a three-panel comic or political cartoon.

First panel: "People of the Americas... You must not farm coca and send cocaine to the United States. War on drugs is U.S. policy."

Second panel: The Statue of Liberty leans down from the podium in a confidential whispered aside—"Psst... Send ALL of the cocaine. We LOVE cocaine."

Third panel: "People of the Americas... You must not come to the United States. You do not want to leave where your grandmother lives and it is U.S. policy that she does not live here."