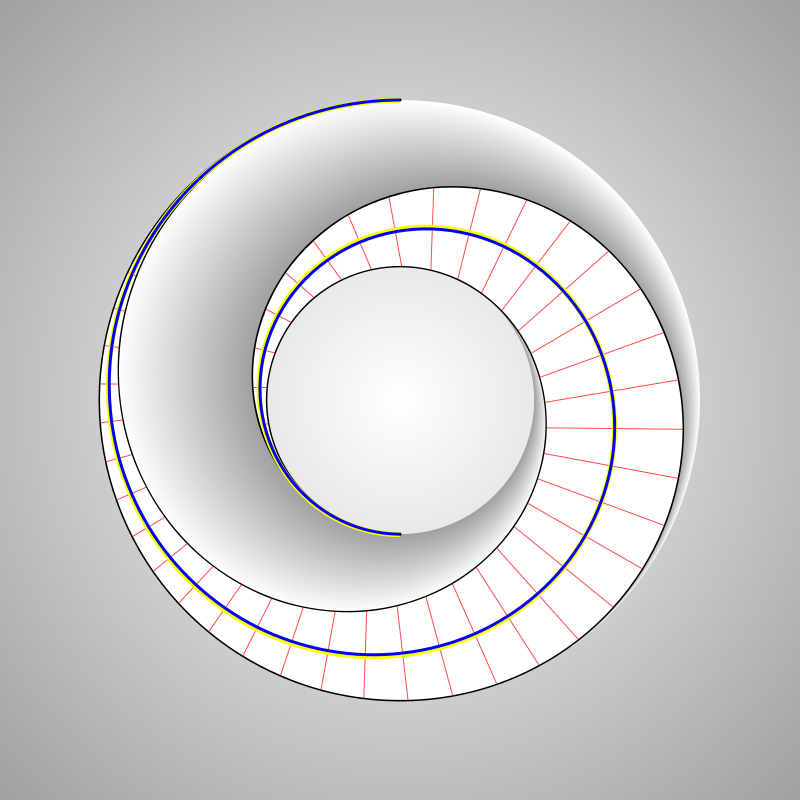 In an attempt to illustrate an unwrapping problem.

Want to use a pattern along path lpe/bend lpe/vector brush to cover the spiral shape, that matches the core path layed down beforehand.

This image shows the two sides drawn with black strokes which is supposed to represent the final tapered stroke's edges.

The yellow path was constructed by interpolating the two edges, should be "somewhere" halfway in between.

Then, added a pattern along path lpe with a pattern of repeating parallel vertical lines, and trimmed it with the two edges.

It is a bit inaccurate, couldn't help that.

Then, the midpoints were drawn of these, supposedly perpendicular paths to the core path.

Surprisingly, these midpoints fall off the previously drawn core path...

Added a powerstroke lpe to this new core path and snapped the effect's handles to the previous perpendicular path's end points.

So far so good.

Now, looking for a way to convert the powerstroke to a pattern along path lpe and then unwrap/unlink the pattern, so the unwrapped pattern shape can be used as a visual guide -boundary. to create an additional pattern that would fit right on the spiral with a pattern along path/bend lpe.

Huh what a long description. Hope someone follows this at least out of curiosity.